What is Microsoft Forms Pro?

Microsoft Forms Pro is a survey solution that allows companies to gather feedback from their clients or internal teams. The tool Forms Pro extends the basic surveying capabilities of Microsoft Forms and seamlessly integrates with Dynamics 365. This makes it easier than ever to gather feedback from customers, prospects and employees. Businesses can then gain deep insights into the responses, sentiment, and suggestions, using built-in analytics or taking it one step further with Power BI.

*UPDATE 23/07/2020: Microsoft has announced the launch of Dynamics 365 Customer Voice, which will replace Microsoft Forms Pro. If you are a current Forms Pro user, you will be transitioned by the end of August to Customer Voice.

Click here to read our full blog about this explains Customer Voice in more depth.

Microsoft Forms has been around for about 6 years, so you might already be familiar with this. However, last year Microsoft announced the arrival of Forms Pro, a step-up from standard MS Forms and essentially a professional version with additional functionality. There are some key differences between Forms and Forms Pro, which we go through below…

When you work with Forms pro and Dynamics 365 together, the data from the surveys (invites and responses) comes back into Dynamics and is stored against the contact or record (e.g. a case or an order). This means that the data around your customers is captured in one common platform and removes any data silos that other surveying tools create.

2. Multiple ways to send surveys In Microsoft Forms, the sharing options are limited:

The sharing options available are: Share a link , Get a QR code, Embed the form on a page, Send an email – If you choose this option, a message in your Outlook is pre-populated with text and a survey link. 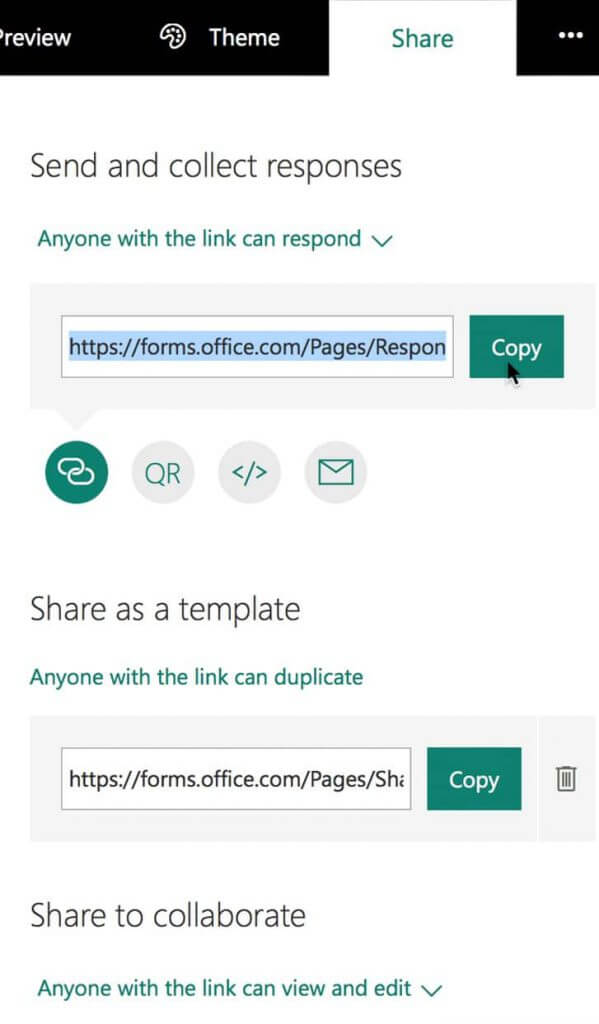 In Forms Pro, the sharing interface is much more comprehensive, as you can see in the image below.

You’ll notice that the same options are available as they are in standard MS Forms, but there are a couple of differences.  In Forms Pro, there is the option to share a survey using Power Automate (previously called Microsoft Flow). This means that businesses can automatically send out surveys based on certain triggers in Dynamics 365, or other Microsoft Applications. For example, when an order is fulfilled or delivered, the contact on the system would automatically send the client a survey, and then the response would come back into Dynamics on the order and against their contact record.

The other difference is the email template builder, which allows you to customise the message which is sent. You’ll notice in the image below, the email also features a logo, which is automatically pulled from your survey. 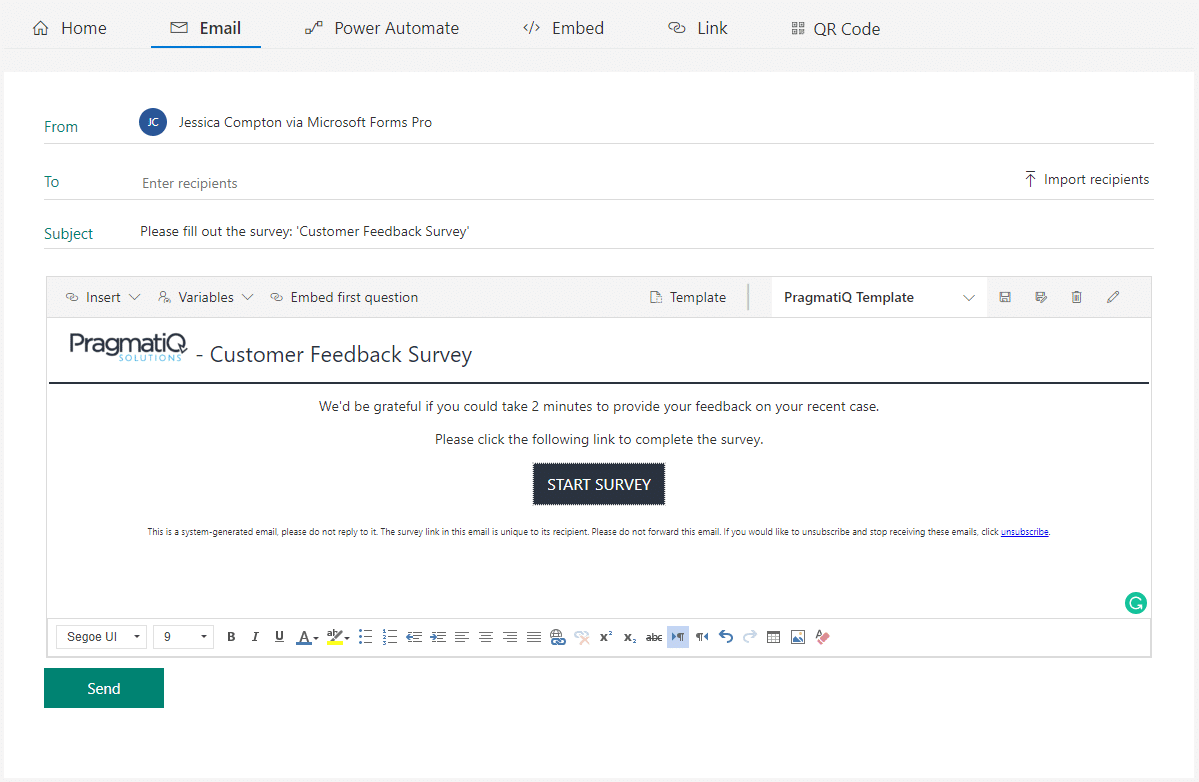 Forms Pro allows you to gain enhanced insight into the responses. In MS Forms, the response analysis looks like this: 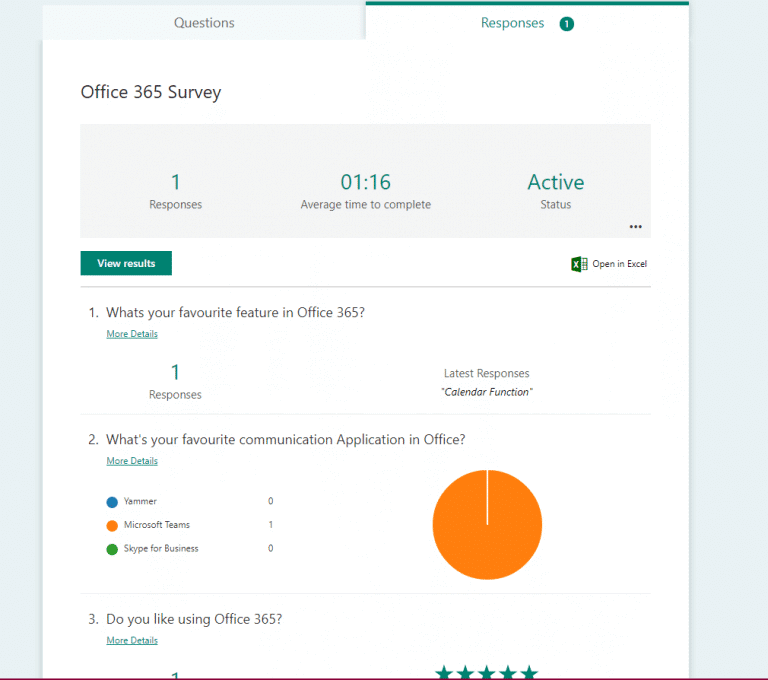 It does what you need for basic response analysis, however, Forms Pro gives you a lot more insight into the responses: 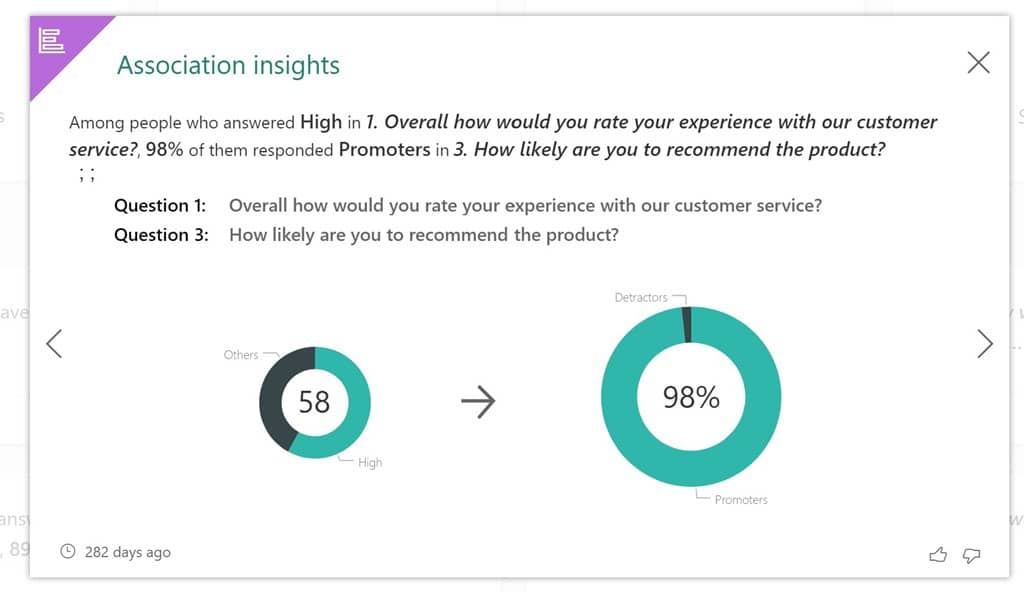 In addition to the standard analytics with Forms Pro, you can also use Power BI, to visualise and gain better insights into the survey data.

Microsoft Forms Pro is included with D365 Enterprise licenses (Sales, Customer Service, Field Service or Project Service Automation), with capacity up to 2000 responses per month / per tenant.   Additional capacity can be purchased at a cost of £75.40 per month for an extra 2000 responses.  It is important to note that although Forms Pro integrates with Dynamics 365, it can also be used standalone. However, you would not be able to leverage some of the key features and the interaction with D365.

Surveys can be dynamic, so questions can be shown or hidden based on other answers to questions. For example, if a question asked for a rating and the response was less than 3 stars, a group of questions could appear to gather additional information around this. 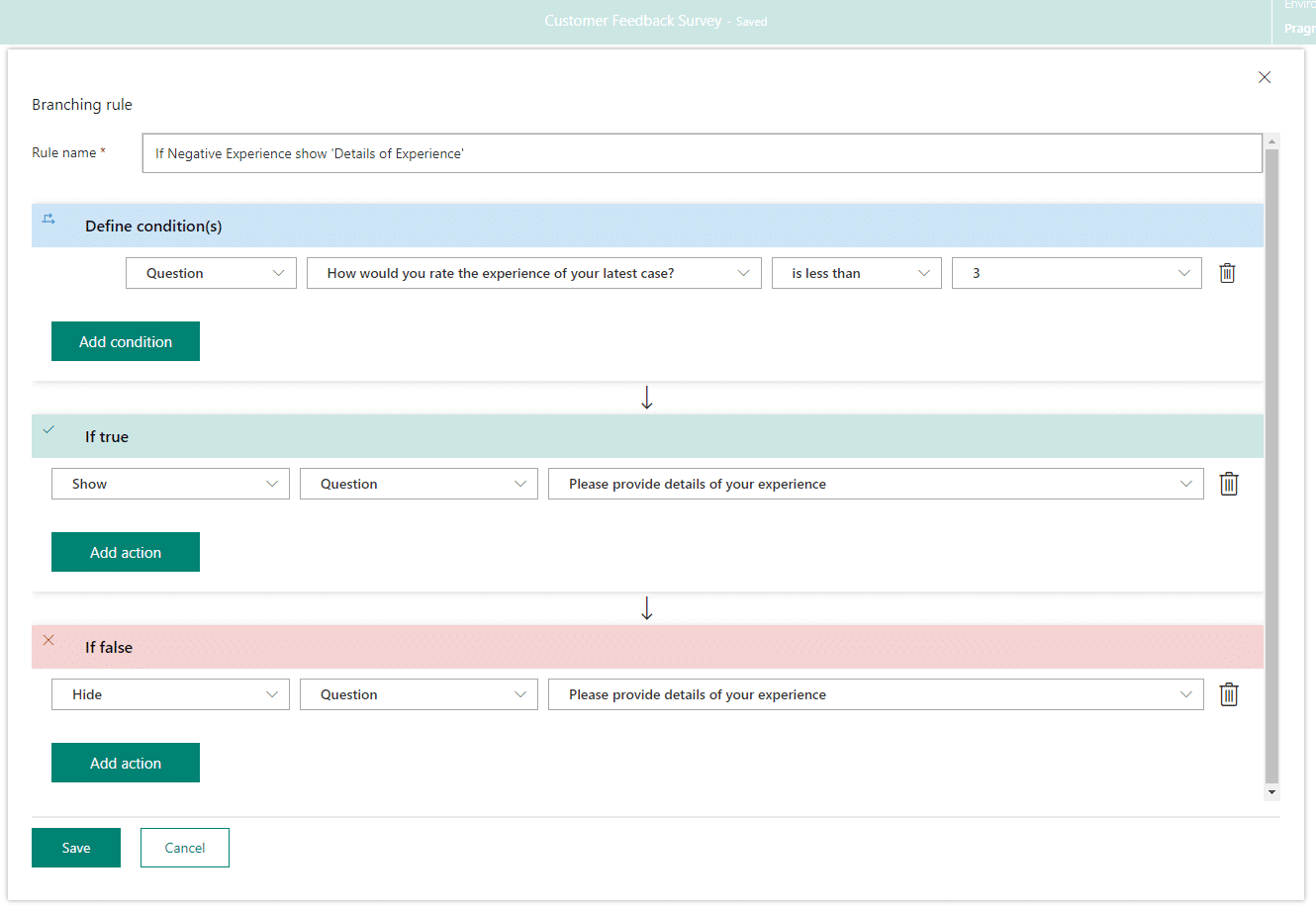 You are able personalise surveys with variables. For example, you can insert the name of the person, or specific case ID. 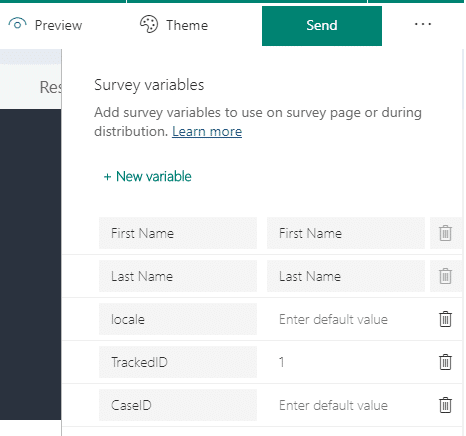 The integration between Forms Pro and Dynamics 365 allows the invites and responses to be captured and stored against the contact or the record (e.g. case or order) in the system. As we stated earlier in this blog, this feature means that all data is stored in one place and removes any data silos that other surveying tools create. 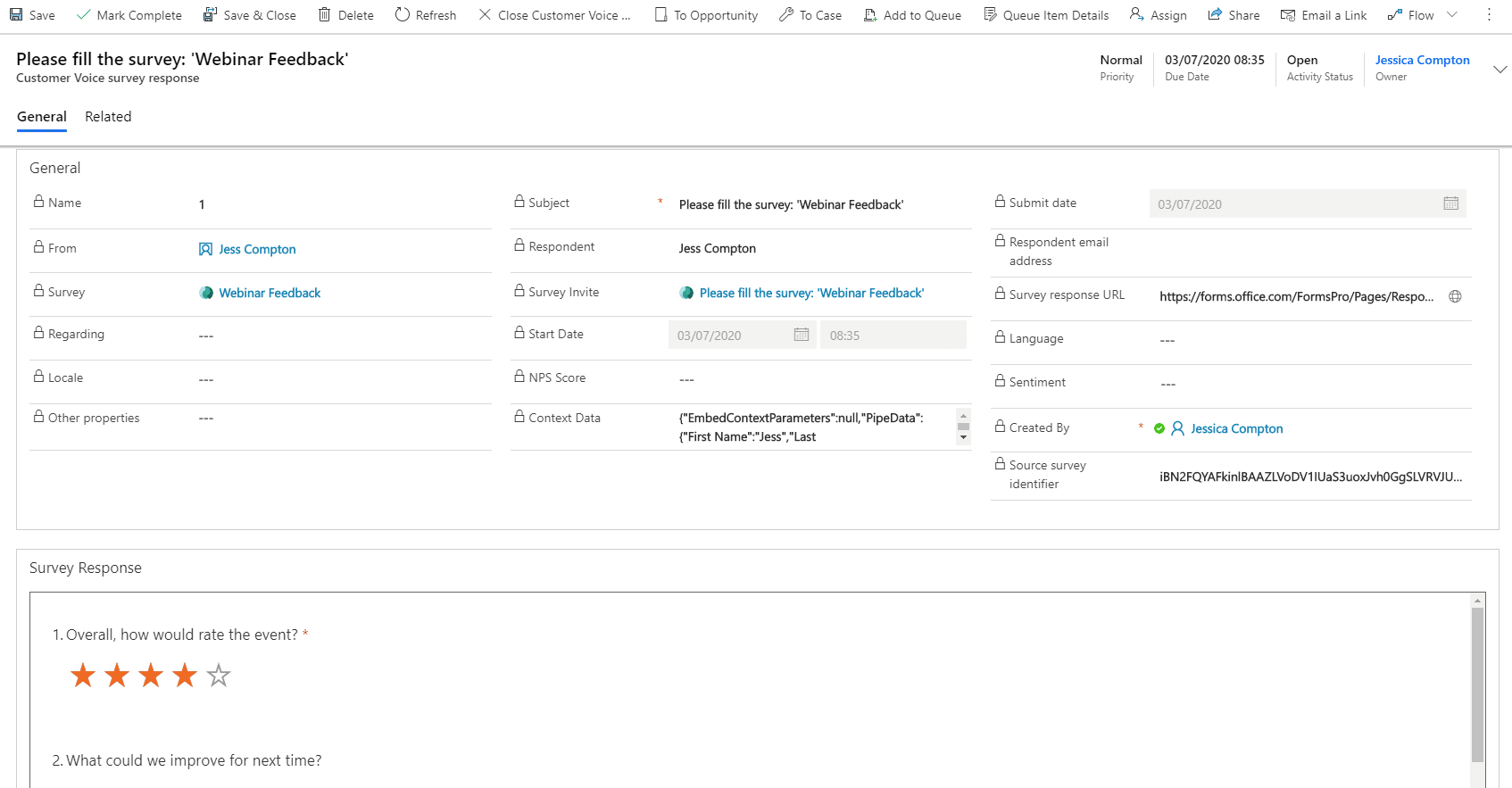 Standard dashboards and reports which we can gain insight from, but can also leverage Power BI on top of this to get a greater understanding into the feedback data. 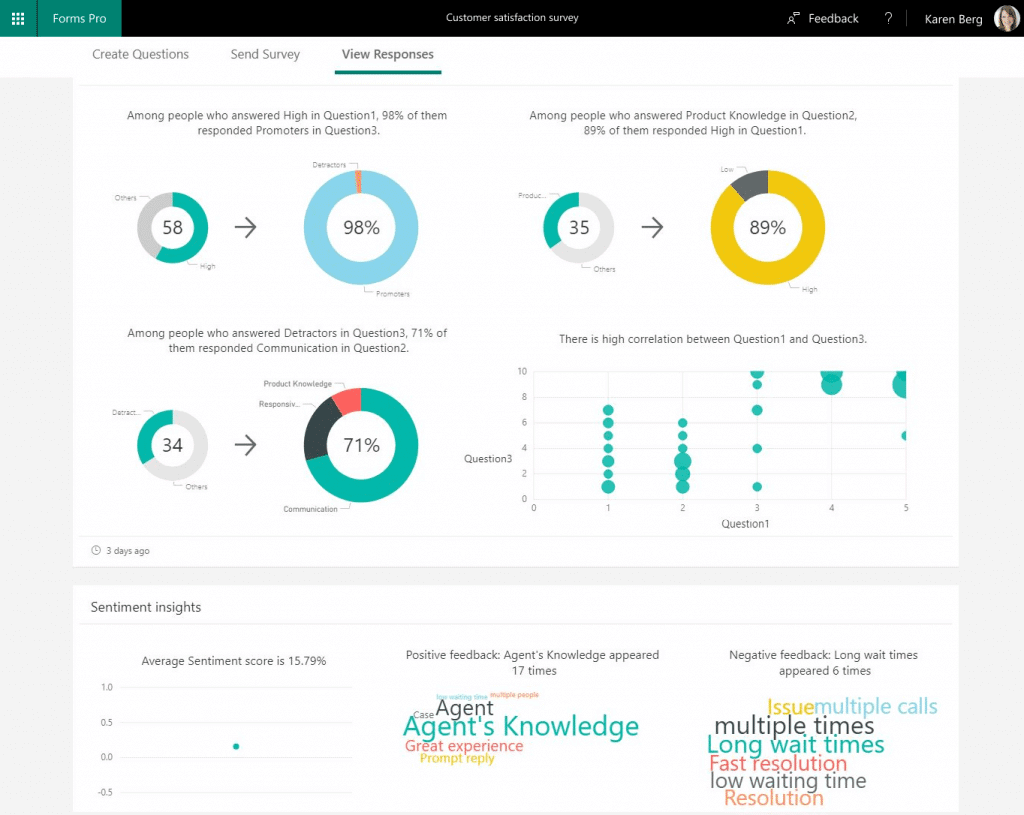 We recently hosted a webinar around Microsoft Forms Pro, demonstrating how to create and send surveys, and then analyse the responses. Watch it here:

In 2020, Microsoft Dynamics 365 Customer Voice replaced Forms Pro. Visit our page to find out more detail about the benefits, features, and pricing of Customer Voice.

If you have any questions, please get in touch. Fill out the contact form below and a member of our team will be in touch shortly, or if you’d prefer, email us at info@pragmatiq.co.uk or call us on 01908 038110. 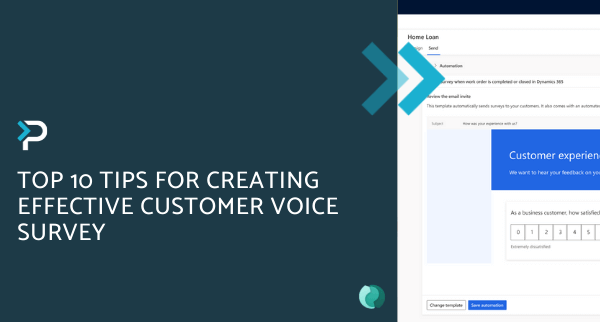 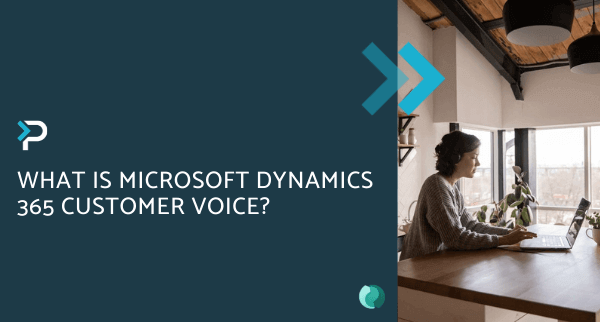 What is Microsoft Dynamics 365 Customer Voice? 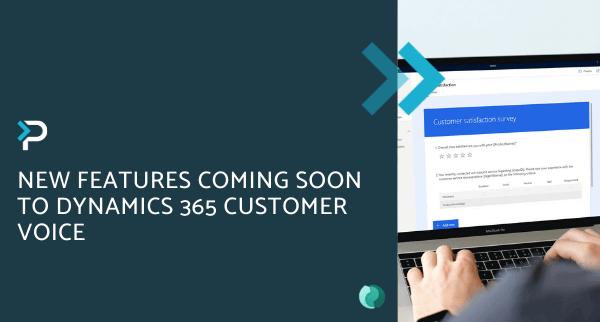